Waitrose are years ahead when it comes to reducing waste and saving our planet from plastic pollution, I am so impressed by waitroses refilling station’s! Total respect to waitrose for making this major change and hopefully it gets rolled out in all thier stores nationwide. For just now they are doing a test run in selected stores.

The supermarket originally launched its Unpacked test in its Oxford Botley Road shop in June, and, following an overwhelmingly positive response with more than 90 per cent of those surveyed saying they would continue to shop Unpacked, announced it would be extending the test there and in three more shops by the end of this year including Cheltenham.

Waitrose is seeking to get as much feedback as possible on its Unpacked test. Customers can share their thoughts via a feedback survey on Waitrose.com/Unpacked, and by using #WaitroseUnpacked Twitter and Instagram.

Coffee refills – Customers can grind one of four coffees in store to take home in a reusable container to reduce glass and plastic packaging.

“We’re thrilled to be only the second of our shops to have Waitrose Unpacked and will be looking for as much feedback as possible from our customers. We’re still testing the different concepts so Cheltenham shoppers will have a huge say on how we can develop ideas which have the potential to be rolled out more widely.” 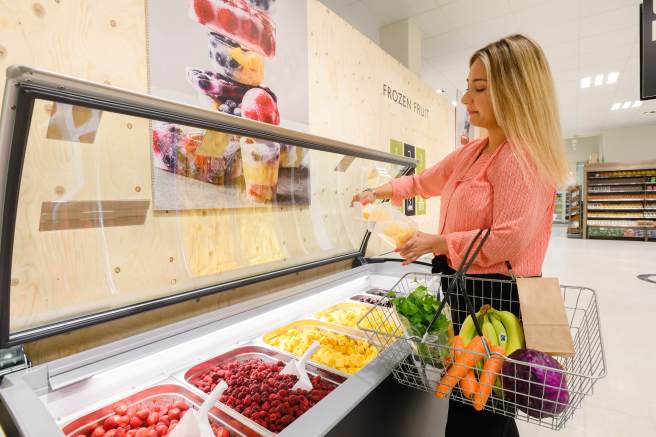 Essential refillables – 28 products including pasta, rice, grains, couscous, lentils, cereals, dried fruit and seeds have been taken out of packaging and is available through dispensers.

These are the refillables you will be able to experience in selected stores and hopefully inside of all waitrose stores soon. Who wouldn’t want  an easy fruit pick and mix fridge that you can just take as many or as little as you would like of each variety?

A new Cookery School has also been launched at the cheltenham store which will host demos by Waitrose experts, see picture above. Learn to create delicious new meals for you and your family.

Tessa Clarke is a farmer’s daughter from Yorkshire, who spent her weekends and evenings helpingher parents, bailing hay and milking cows. After graduating from Cambridge, Tessa began her professional career as a strategy consultant with BCG and then went on to spend 7 years withEMAP, breaking for 2 years to attend Stanford Graduate School of Business, where she met Saasha. At EMAP, Tessa was a divisional MD for Planet Retail, a global retail intelligence business. She then moved to become Global MD for all things digital, CRM and e-commerce at Dyson, where she stayed for 4 years. Prior to founding OLIO in early 2016, Tessa was the MD of Wonga UK, responsible of leading its turnaround.
Email: tessa@olioex.com|Twitter: @TessaLFClarke
Saasha Celestial-One is the daughter of Iowa hippy entrepreneurs who was raised with a deep appreciation for the planet and its scarce resources. She rebelled by moving to New York City andjoining Morgan Stanley after graduating from the University of Chicago. After completing her MBA at Stanford Graduate School of Business, where she met her OLIO co-founder Tessa, Saasha spent 9 years in various strategy and businesses development roles, first at McKinsey, and most recently as Vice President of International Partnerships, American Express. She could only rebel for so long however, and when on maternity leave in 2012 opened her first business in London, which she outfitted entirely from FreeCycle. It was a short skip and a hop to founding the food sharing app OLIO with Tessa in 2016.
Email: saasha@olioex.com|Twitter: @saashaN8
Thank you saasha and tessa for setting a good example for our youth and making the world a better place to live in 😉
💖🌎📍
October 11, 2019October 11, 2019 ~ SUMMER BREE ~ Leave a comment
Recently I have been looking for ways to reduce my waste and also give away unwanted items, I’m already a member of a few frecycle clubs and online free cycle websites. I’d never thought about one dedicated to food waste. When I came across OLIO on Google play store I just knew this was one of the best apps to be created in the last few years. It’s so easy to use and you never have to throw away unused goods again !

OLIO is a free app (mobile & web) that connects neighbours with each other and volunteers with local businesses, so surplus food can be shared, not thrown away. If you love food, hate waste, care about the environment or want to connect with your community, OLIO is for you.

Ultimately, the mission is to unlock the value of food that is wasted in the home and local community. The way the app works is simple. Users snap a photo of their spare and add it to the app. Neighbours who live nearby receive customised alerts and can request anything that takes their fancy. All items are offered for free.

Food shared could be food nearing its sell-by date from local stores, spare home-grown vegetables, bread from the local baker, or the groceries in your fridge when you goaway, move home or go on a diet. You can also share non-food items such as furniture, clothes, toys, household and beauty products.

Food waste is a major issue, and not just for the supermarkets. Globally, a third of all food produced is wasted, and in the UK, households account for half of all waste-binning over £15bn of edible food, costing families £800 per year (ref). Food waste is also costly for local stores and councils and ranks as one of the world’s largest emitters of greenhouse gases.

OLIO has been used in over 50 countries and over 1.8million items have been successfully shared between neighbours. That’s the equivalent of preventing 1,564 CO2emissions from entering the atmosphere and eliminating 4,692,637car miles from the road.

OLIO also has a flourishing volunteer network-over 36,000 people have reached out to the organisation requesting to become volunteers, to promote food sharing locally and rescue and redistribute food in their communities via OLIO!

If your into detox baths then you have to try magnesium flakes! You simply add them to your bath as you would with Dead Sea salts, Clay or Epsom. Then just relax and enjoy. 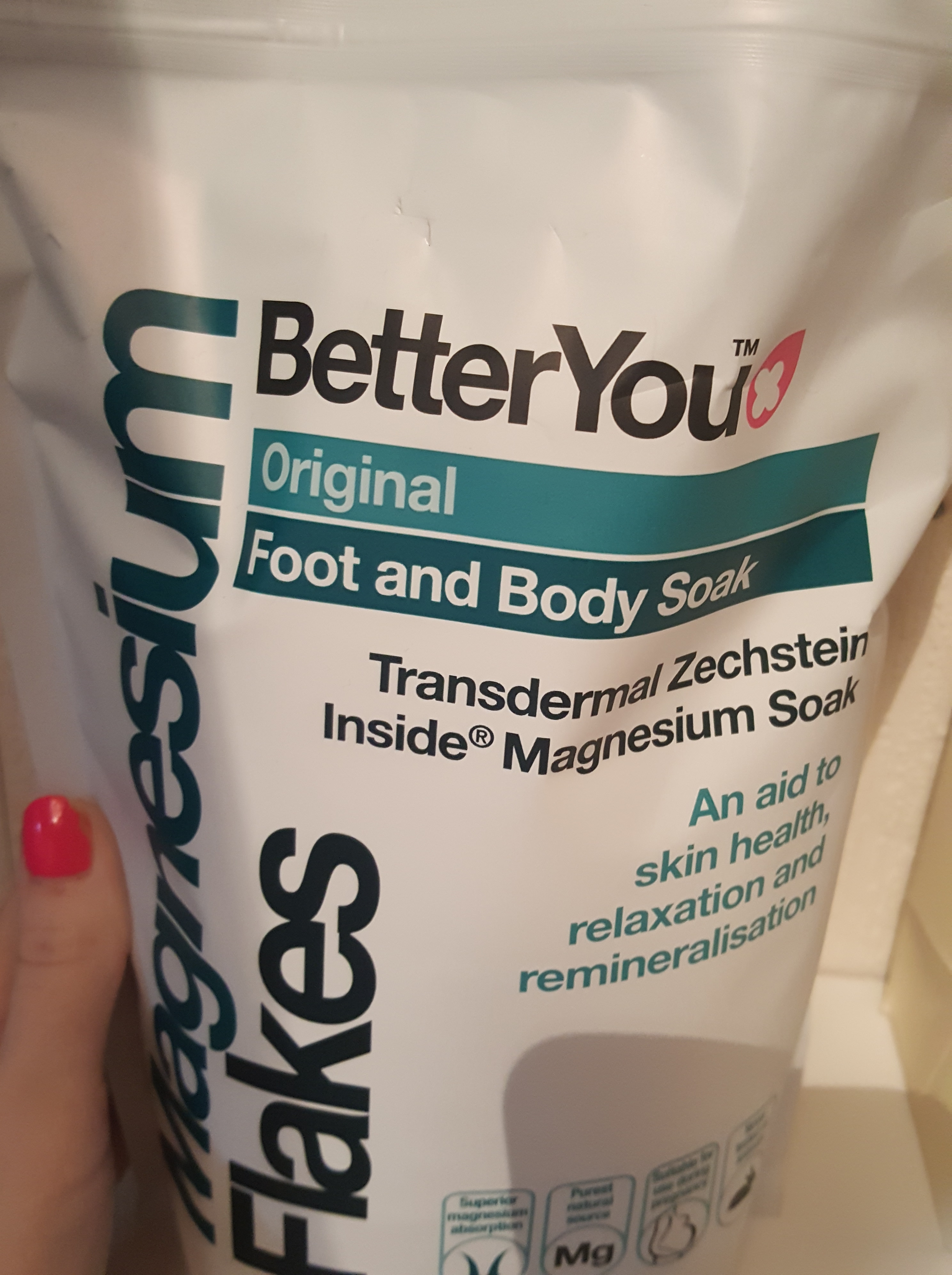 I’m a massive fan of detox baths and usually combine it with my beauty routine, I will put on a face mask and hair conditioning mask while I’m in my bath. Lately I was in a herbalists shop to get some more epsom & vitamins and a nice assistant recommended magnesium flakes. Never have I ever used them before, she explained it was a muscle relaxant and it can be very powerful.

When I had my bath with the magnesium flakes my muscles were so relaxed, a bit to relaxed! It was a nice feeling and now I love having a magnesium bath now and then. I also felt so relaxed and sleepy when I come out the bath which is great! Magnesium has other benefits too like anti aging and helping with skin conditions. 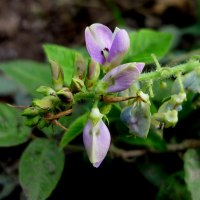